The Myth of Reverse Racism 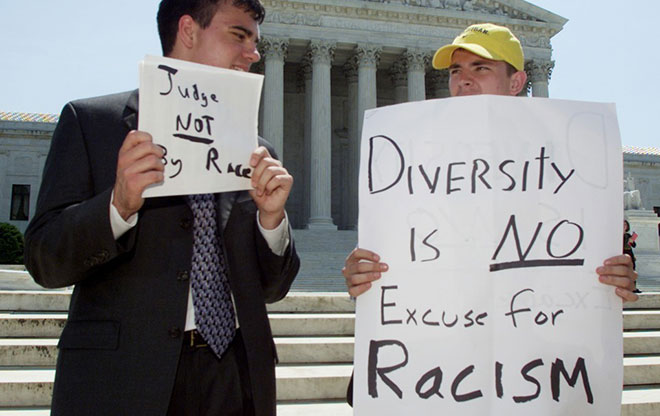 Contrary to initial indications, the civil-rights division of the Department of Justice won’t be dismantling affirmative action after all. At least, that’s the current word from Trump administration officials, after a New York Times article claimed the department would be using the broad powers of justice to take on universities that it decided had discriminated against white people. The DOJ since clarified that it was gearing up to investigate complaints from dozens of organizations alleging that certain universities used quotas—which are illegal—to limit the number of Asian American enrollees.

Still, the beacons have been lit, and America’s annual heated argument about affirmative action has begun anew, this time against the background of racial tensions that have helped define the early goings of the Trump presidency. As always, those tensions and long-held beliefs about racial advantages rule the debate.

As my colleague Alia Wong notes, that debate is still hamstrung by a number of misconceptions about affirmative action, including the tendency to flatten issues pertaining to Asian Americans. These misconceptions are often exploited to serve the interests of white resentment that’s surrounded the use of race in job and university-application processes since the 1960s. To quote a 1995 Boston College Third World Law Journal article: “The deployment of Asian Americans as an exemplary group in race relations is nothing new. The model minority myth of Asian Americans has been used since the Sixties to denigrate other nonwhites.”

The Times article jumped immediately to that white resentment. It identified “affirmative action admissions policies deemed to discriminate against white applicants” as the key target for the Justice Department. It also cited the former Reagan administration and Bush administration official Roger Clegg, who claimed that “it is frequently the case that not only are whites discriminated against now, but frequently Asian Americans are as well.”

While the Times’s focus on “reverse racism” may not have entirely captured the actual policy issue in front of the DOJ, the connection was understandable. White animus against affirmative action is a driving force in the debate over race-conscious admissions.