The White Privilege of the “Lone Wolf” Shooter 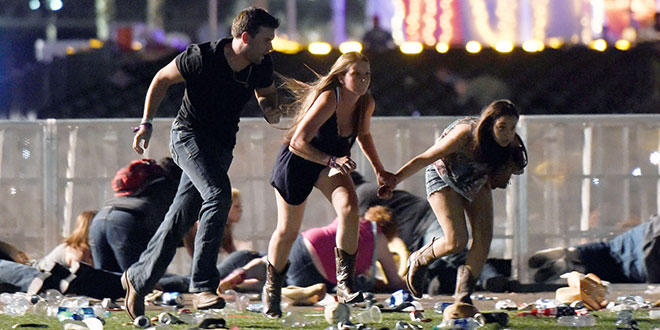 Last, the United States experienced the deadliest mass shooting in modern American history. At least 58 people are dead and over 500 more wounded. No, that’s not a typo: More than 500 were injured in one, single incident.

As tens of thousands enjoyed a music festival on the streets of Las Vegas, 64-year-old Stephen Paddock, of Mesquite, Nevada, was perched 32 floors above them in his Mandalay Bay hotel room. Paddock had 19 rifles and hundreds of rounds of ammo — supplies that are plentiful in a nation that has more guns than people. A few minutes after 10 p.m., Paddock opened fire on the unsuspecting crowd. They were sitting ducks.

No expensive wall along the Mexican border would’ve prevented this. No Muslim ban stopping immigrants and refugees from a few randomly selected countries from reaching our shores would’ve slowed this down.

Paddock, like the majority of mass shooters in this country, was a white American. And that simple fact changes absolutely everything about the way this horrible moment gets discussed in the media and the national discourse: Whiteness, somehow, protects men from being labeled terrorists.

The privilege here is that the ultimate conclusion about shootings committed by people from commonly nonwhite groups often leads to determinations about the corrosive or destructive nature of the group itself. When an individual claiming to be a Muslim commits a horrible act, many on the right will tell us Islam itself is the problem. For centuries, when an act of violence has been committed by an African-American, racist tropes follow — and eventually, the criminalization and dehumanization of an entire ethnic group.