When White People Say They Have My Back, What Does That Actually Mean? 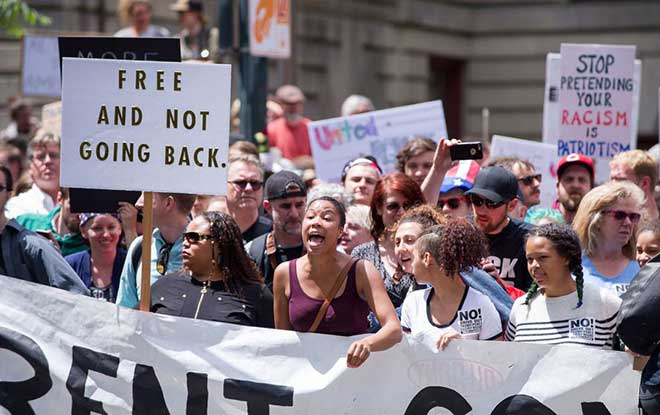 In the pre-dusk silence, a collective stiffening coursed through the vigil. Though progressive transplants from California and the East have cemented Portland’s liberal identity, Oregonians walk among us whose parents were Ku Klux Klan members. Speaker upon speaker addressed the need to address the meaning of our state’s uniquely racist past in their lives. As they spoke, the mother of Namkai-Meche held out a photo of her bearded, glee-filled son. A murmur circulated around the crowd of Namkai-Meche’s reported last words: Tell everyone on the train I love them.

It was at this moment that the mourners, this newly reconstituted “we,” suddenly browned to its soul, went full-and-final solidarity.

“People of color?” the white folks said again and again, “We have your back!”

This made a lot of white people applaud. Nodding and the whole nine. A significant number of PoC’s put their hands together, too.

But every time one of these Portland people said they had my back I thought, Really? What does that look like?